It feels like only yesterday that we review the rather excellent Mandate of Heaven expansion for Total War: Three Kingdoms, and SEGA/Creative Assembly are already announcing a brand new expansion, titled A World Betrayed. This latest Three Kingdoms DLC is a smaller ‘Chapter Pack’, much like Eight Princes was last year.

It will offer a stand-alone campaign experience which will pit new factions & characters against each other in the struggle for domination of China. The iconic Dong Zhuo has been assassinated by his son, Lü Bu. Meanwhile, the equally ambitious General Sun Ce is mourning the death of his father and seeking to continue his legacy. These two new central characters will lead two new rival power-blocks that will dominate this campaign.

The new DLC will have the the following new content:

Curiously this campaign seems like it’s going to be set in the middle of the main campaign. Three Kingdom’s vanilla start date is 190 CE, where-as historically Dong Zhuo was assassinated in 192 CE. According to the FAQ, the campaign officially starts in 194 CE. Given that each turn represents a season, and there are five seasons in a year, this means that A World Betrayed essentially is set around Turn 20 of a vanilla campaign. Differing start dates aren't exactly a new concept - Paradox does them in their own games, but no-one really interacts with them and it's interesting seeing Creative Assembly trying to embrace this. For some reason it doesn't feel quite as natural.

We imagine this new pack then offers a more condensed version of the main-campaign, or at least the earlier portions. With only two overarching blocks, it’s unlikely this campaign will work towards the full ‘Three Kingdoms’ endgame of the main campaign. Instead, it will offer a more directed version of the mid-game, with new characters and stories to play around with. With many of the existing Warlords getting new starting regions as well, a lot more of the southern areas of the map will be relevant a lot more quickly.

Along with the new expansion pack, a new free patch will be dropping at the same time as has become standard. More details on this will be revealed later, but it will introduce a new playable faction along with new unique units, buildings and other improvements to the main campaign.

Heaven was torn asunder, earth did fall away. Four years after the fall of Luoyang, China remains in chaos. Dong Zhuo, the catalyst of the fracturing of the Han Dynasty, has been dead for two years at the hands of his (turns out not so) loyal vanguard Lü Bu. The new general is having a hard time garnering alliances, quickly securing deals due to his fighting prowess yet swiftly falling out of favour due to hubris. 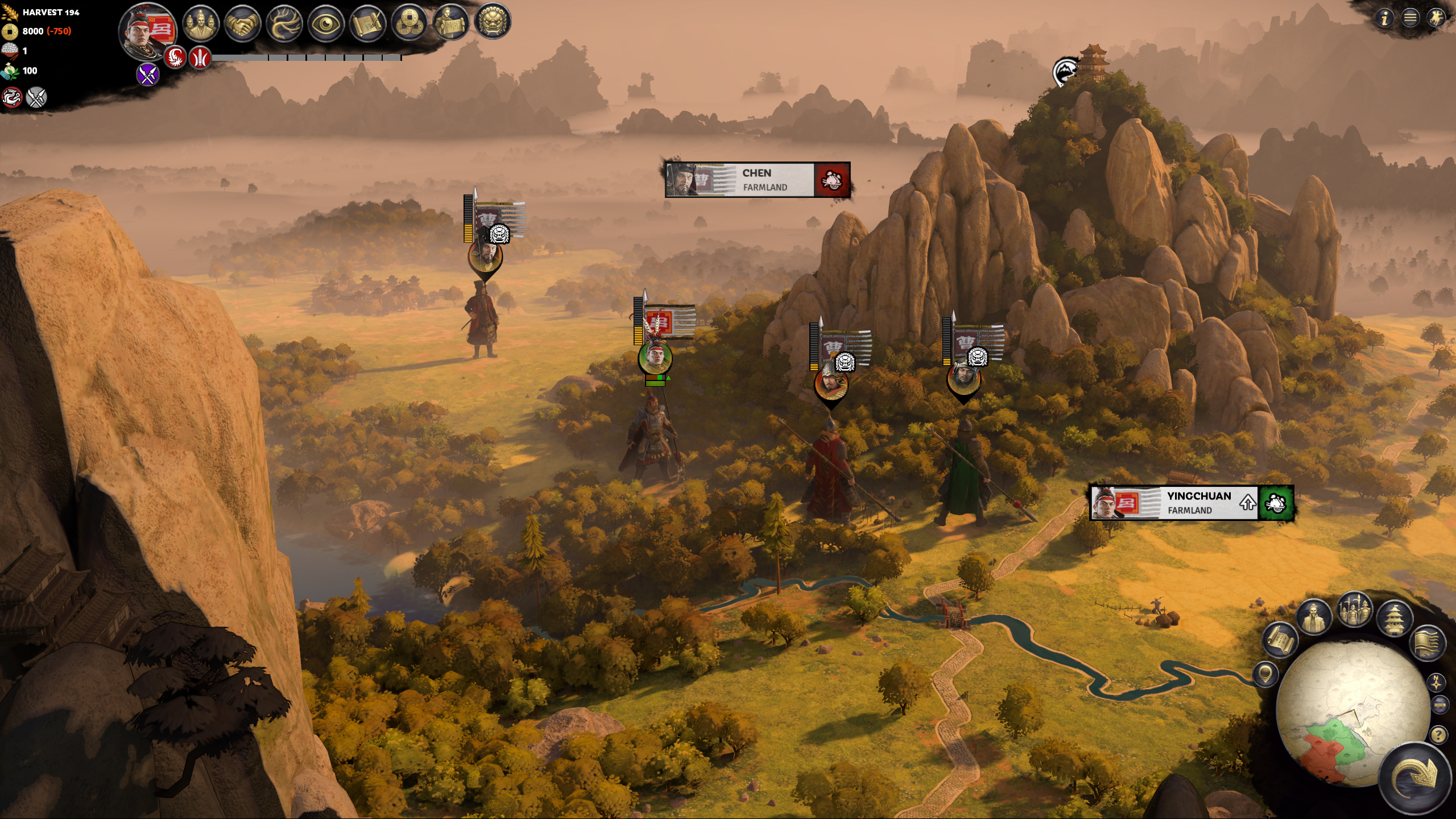 Meanwhile in the South, Sun Ce mourns the passing of his father Sun Jian. The military general passed away, leaving Sun Ce in charge but still a vassal of Yuan Shu. With the choice between staying tied to an overlord or carving his own path, Sun Ce must make up his mind.

A World Betrayed is a different DLC from the ones that came before, bringing a more thematic approach similar to the Total Warhammer expansions. Revolving all around father figures and the impact of their legacy, the latest Total War: Three Kingdoms expansion has a bit more heart than the “China is in Chaos, unite it” tagline of previous tries. Usps parcel select ground.

Continuing the pattern of differing start dates started in Mandate of Heaven, A World Betrayed starts in 194 AD (or, turn 20) and adds Lü Bu’s and Sun Ce’s factions as playable exclusively from that starting date. While the dichotomy of their father-son/mentor-protege relationships is at the heart of the story, the DLC also adds new set-ups for Cao Cao, Liu Bei, Yuan Shao, Yuan Shu, Liu Biao, Zhang Yan, Zheng Jiang, Gongsun Zan, Kong Rong, and Ma Teng.

Lü Bu’s campaign starts between a rock and a hard place, as his offensive against Cao Cao lands hits a wall. Cao Cao was away avenging his father’s death, but now he’s back with four armies and ready to kick Lü Bu’s ass for taking advantage of his absence. This first turn presents the player with an option -- abandon a city and take out a reinforcing army on your way back to your lands to regroup, or stay and fight against way too many armies. Both are feasible, but the recommended approach for 90% of players (and canon choice) is the former.

To spur Lü Bu in his retreat, you make use of his new exclusive Momentum mechanic. Aside from granting an extra post-battle option that resets all movement points at the expense of making the army tired, every enemy character defeated in battle grants Momentum points that grant powerful bonuses. Boons to satisfaction, campaign movement range and replenishment, melee damage and morale are all part of the package, but Momentum quickly wanes over time. You can also use momentum for special actions such as coercing others during diplomacy, encouraging a very aggressive play style for Lü Bu (which is amusingly described as a “One man army”).

In character with his hubris and fight prowess, Lü Bu also has a unique list of the 'Greatest Warriors' in China, encompassing most characters in the game. Defeating them unlocks permanent bonuses to the faction, but it does mean you have to play Bounty Hunter lest someone else gets the kill and strips you from the bonus forever.

Sun Ce is a bit different. The guy apparently had amazing luck -- so amazing, that his very existence depended on it. His exclusive 'Reckless Luck' meter gives Sun Ce’s faction extra campaign movement range and supplies along with a lower upkeep, but the downside is that if his luck runs out, he immediately dies. To make up for that abrupt escalation, Sun Ce has a list of ambitions chronicled as the 'Legacy Of Wu': a list of his father’s goals that allows Sun Ce to regain his homelands to the South, reunite his father’s generals and new high-level characters, and get vengeance for his dad’s murder. Completing these goals grant you extra luck, and once you manage to garner enough completed missions to offset the permanent -10 luck lost per turn, you should be able to keep Sun Ce alive forever.

In classic TW fashion, the DLC also brings in new units. Sun Ce has access to the Tiger Guard heavy spear infantry and the Handmaid Guard medium sword cavalry, as well as his father’s Mercenary light Archers, medium axe Infantry, and medium spear Cavalry units. Meanwhile, Lü Bu gets the Camp Crushers two-handed sword infantry and the Flying Riders armoured shock cavalry (they don’t really fly). It helps with 3K’s original lack of unit variety, but it will never make up for the fact that you are still pitting a bunch of Chinese against another bunch of Chinese -- something that will never match the diversity of large-scale games like Rome II, Attila or the Total Warhammers.

Truth be said, I enjoyed A World Betrayed more than the previous 3K DLC. The more emotional and dichotomy thematic makes it for a tight and well centered expansion that is vastly more interesting than random people doing random things, and Sun Ce’s luck mechanic was highly pleasant to play with (once you get past the existential dread of an immediate death literally caused by “Chinese dude ran out of luck”). If you’re into a more aggressive play style and just can’t get enough of 3K, A World Betrayed is definitely worth a shot.

An excellent new addition to Three Kingdoms DLC roster, and a great way to skip the early game if you want to get stuck in to something meatier.