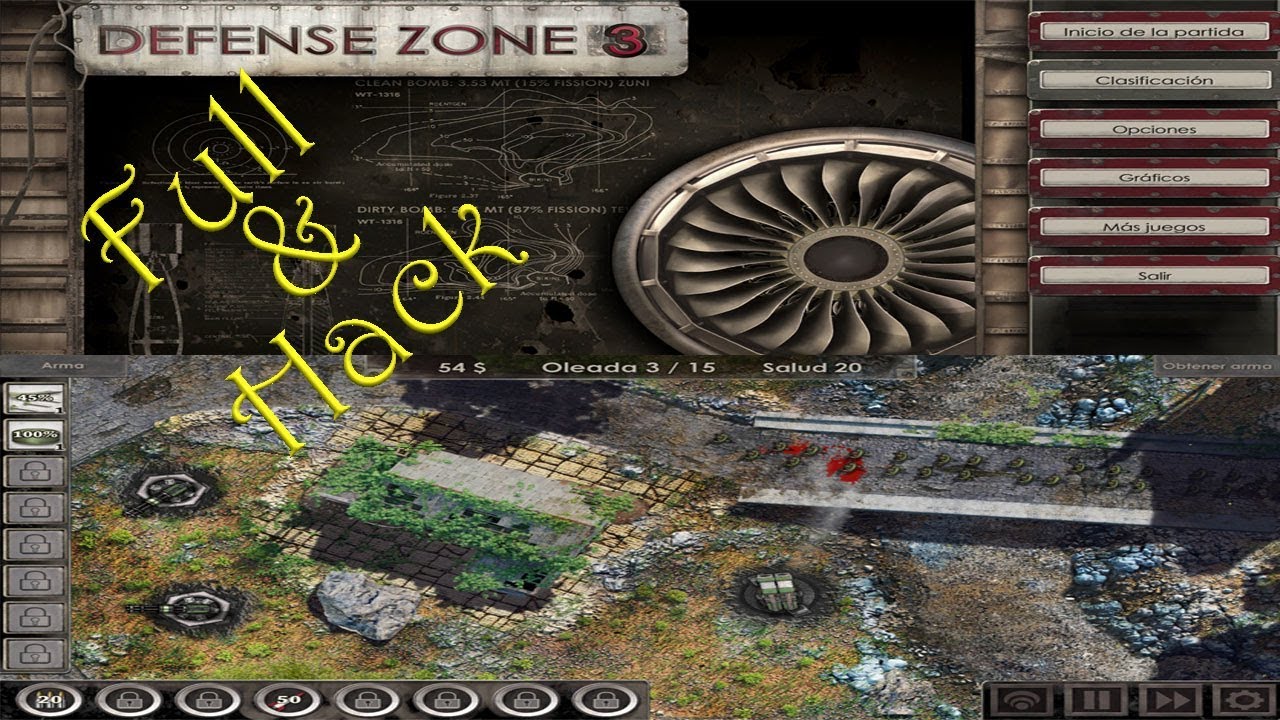 To promote Defense Zone 3 Ultra HD and grow its popularity , use the embed code provided on your homepage, blog, forums and elsewhere you desire.Or try our widget.

I like having games that I can run that don’t require a lot of focus or attention. Something that can chew up a few minutes of time while I wait for something like an upload to YouTube. Enter, Defense Zone 3.

Well, you still need to come up with a strategy to get the most out of this game. But, it’s something you can play in the background whether you’re watching Netflix or waiting for the laundry to be done.

And over the past several years, I’ve clocked in 274.8 hours of play. An hour here, 30 minutes there; it all adds up after a while.

What is Defense Zone 3?

Defense Zone 3 was released in December of 2016. It’s a tower-defense game in which you construct platforms to defend against an onslaught of soldiers, tanks, mechs, boats, and jets. The goal: to finish each level without losing health, which is reduced by one point for every unit that slips by.

If you can beat an entire level without losing a single point, you’ll earn an achievement on Steam. There is one of these achievements for every difficulty and play level.

If you get into trouble, you can use any of the ultimate weapons on the left once before it has to recharge. You can also use them strategically instead of a weapon of last resort.

For example, I’ll use some of the more destructive ones to eliminate a swath of units while waiting for a howitzer to upgrade.

While it doesn’t have multiplayer support, Defense Zone 3 does support Steam’s Leaderboard feature. It’s a single-player game focusing on score and more than 100 achievements.

It’s not an overly popular game by any means. According to Steam Charts, the peak number of players in September 2020 sat at 38.

But, just because something isn’t popular with the masses doesn’t mean it’s not fun. Personally, I rather enjoy Defense Zone 3.

What makes the game worthwhile for me, is:

Aiming for the Achievements

Like I said, there are a lot of achievements for this game. Right now, I’m working on beating every level on every difficulty without losing a life. At the time of this article, I am half-way through Hard.

Once I am done with these achievements, though, I plan on going through again and seeing what I can do to get a better score.

Coming Up with Different Strategies

One of my favorite aspects to any game is coming up with my own ways to play. It’s mostly why I don’t look up equipment builds or walk-throughs for various games.

I get more satisfaction knowing I was able to beat the level using strategies I create myself.

And then, for a bit of extra fun, I see if I can beat the levels using the lowest levels of towers, limiting how many I use, and so forth.

Is it possible to beat the entire level with nothing but machine guns? Can I fill the battlefield with laser cannons? Those are the types of questions I like to know the answer to.

Yes, I am a bit weird that way.

Even after being published on Steam close to four years ago, the developer is still updating Defense Zone 3 Ultra HD. In fact, two new levels were added in 2020 at the time of this post.

This also included more achievements for beating the levels.

I like to see developers of small games still give those titles some love after several years of being on the market. Too many others seem to abandon older games for something new.

Great as a Time Waster

Defense Zone 3 is a great time waster. In that, I mean that you can jump into a game quickly and melt through 10 minutes.

Your progress is saved after completing each level, which is kind of a downside. But, it’s perfect for those moments when you’re just sitting around waiting for something or just want to play a quick game.

Doesn’t Take a Lot to Run

Defense Zone 3 Ultra HD requires 1gb of memory and a processor with 1.5ghz to run. And it only needs 512mb of hard drive space to store the game.

This means it doesn’t take very much at all to run, which is perfect for older laptops or those who still use older computers. Indesign v16 serial.

So, on my work laptop, which really doesn’t have a lot of umph behind it for a $200 unit, the game runs perfectly.

To be honest, I enjoy tower defense games. And given the variety of maps available in Defense Zone 3, it’s one of the reasons while I’ll probably log more than 300 hours before the end of 2020.

And for $3.99, that’s a lot of hours for what I paid. Though, I think I bought it when it was a bit higher than four bucks.

Still, It’s among the cheapest games I’ve ever bought, but definitely among my most played.

Is Defense Zone 3 Ultra HD Right for You?

It’s a great game for those who enjoy tower-defense strategies. There’s not a lot of interactive activities, meaning you’re not using your keyboard or controller to run around a map and engaging the game.

It just takes a few clicks of the mouse and seeing if your strategy pans out.

But for how cheap the game is in general, you really can’t go wrong if you have a couple of bucks to spare.